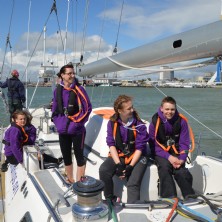 First we travelled from Peterborough train station and arrived at Gunwaugh Quays and got onto challenger 3. We were introduced to the skippers (Julian), mate (Amy) and Watchleaders (Georgia and Gareth). After being introduced we looked below deck and then on the deck we found the navigation section one of the most interesting bits of the boat. After this we then got our wet gear together as well as our lifejackets. By 1530 we had set off from Portsmouth and did a starboard and port runner race between to the two watches in which Georgia’s watch won; no matter how much the other team say they had won. By 1800 we had arrived in East Cowes where our watch was in charge of making dinner- chicken Fajitas they were delicious! Josh. M washed up for the first time and wants his mum to know he is available for all washing duties upon his return. We then went for showers whilst the skippers, mates and more competent crew put up the new main sail ready for use tomorrow. We are all excited for a play in the water tomorrow.