Another fantastic day over here in Shanghai, the weather has been brilliant and so have all the students!

Another fantastic day over here in Shanghai, the weather has been brilliant and so have all the students!

An early start for some waking up around 5ish and still adjusting to the time difference however they were all out for the count around 9.30 the night before so they got a pretty good sleep. We headed over to breakfast nice an early as we had a busy day planned in school, breakfast was certainly a success Mr Barwise commented that he had never seen it go down so well. Students were tucking in to eggs, bread, churos (like a donut) and sponge cake (yes I know cake for breakfast however we are throwing ourselves into the culture). 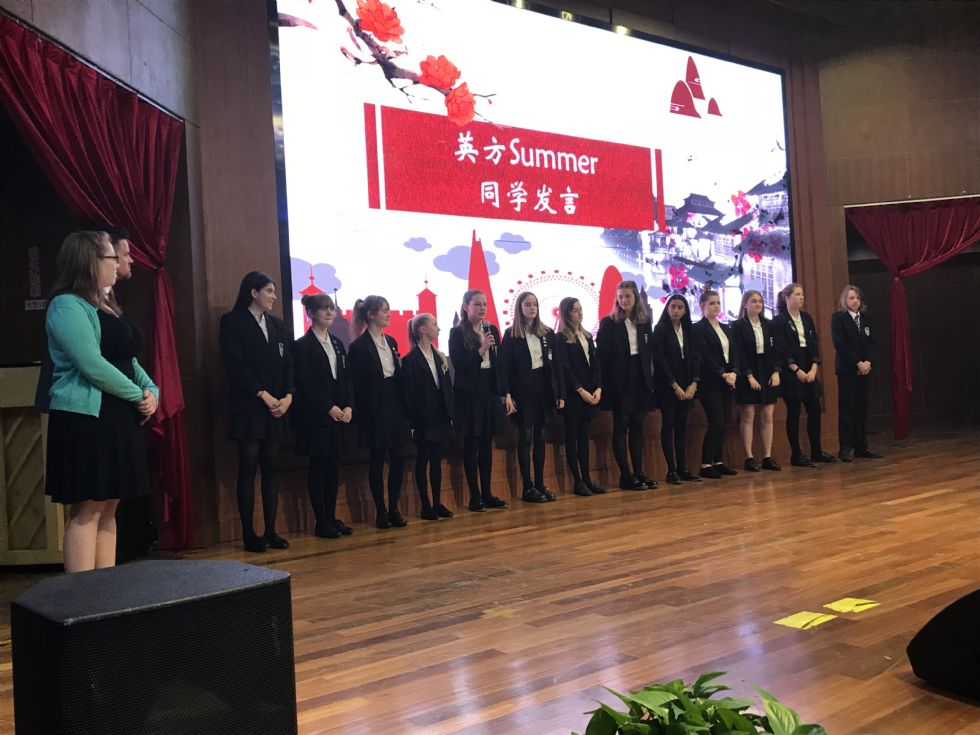 Next up we headed over to the conference centre to prepare for the flag raising ceremony that was going to be attended by all the students in the international department of the school. Normally this is held outside however as the French branch of the school was having their sports day out on the field we moved inside to a lovely conference centre with cinema seating throughout (very posh!). As part of the ceremony both flags were marched onto stage by some of the Gold Apple students and both national anthems were played and sung. Two Gold Apple students were hosting the ceremony and they welcomed everybody outlining the importance of the special partnership between the two schools constantly swapping between Mandarin and English which was very impressive! Following this Principal Eugene who leads the international department here at Gold Apple and Mr Barwise both gave lovely speeches on what the exchange meant to everyone involved and emphasised just how much the students on both sides get out of the programme. Jack Hunt students were then invited up on stage and Summer spoke very eloquently and delivered her speech to the 400 guests in attendance before one by one the rest introduced themselves giving thanks for welcoming us into their school. Being over here for the first time this was amazing to experience first-hand. 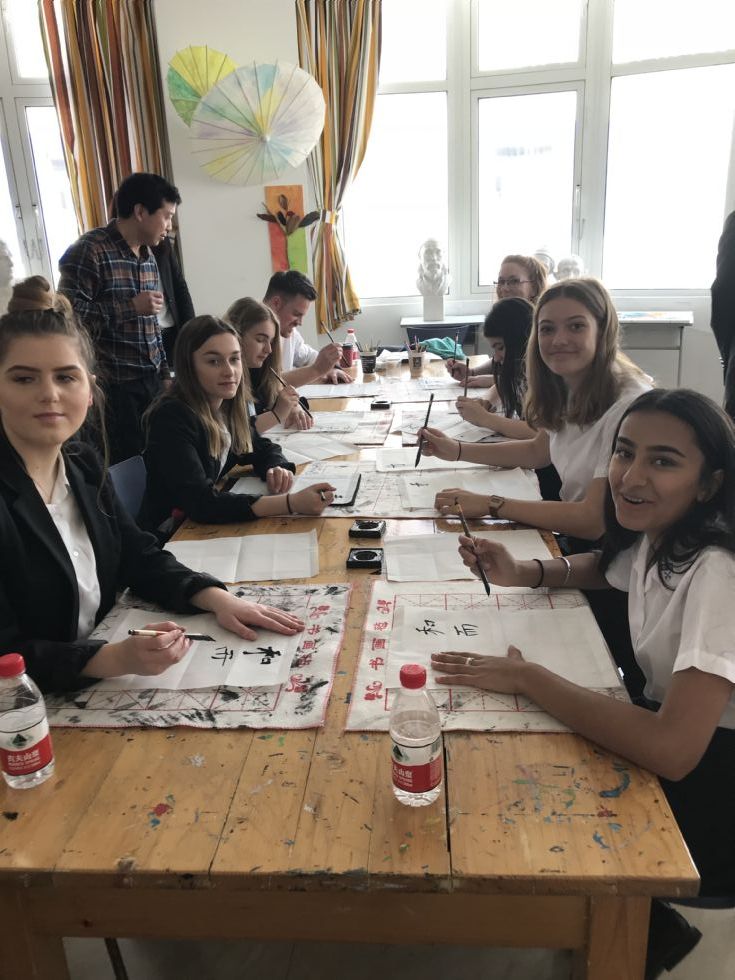 Following this we headed over to one of the meeting rooms to plan for this afternoons sports festival where the students along with the Gold Apple students would be leading an hour long event to 90 which suddenly then became 120 students!! JH students were paired up with Gold apple students and they had some time to explain the station they had planned and exactly what they were doing. This then became a chance for students to have a half hour chat about anything and everything, it was really pleasing to see how confident and outgoing our students were and the students from both schools seem to be getting on great.

Then we headed upstairs to take part in some traditional Chinese calligraphy led in Mandarin by one of the Gold Apple teachers with help from a Gold Apple student who was translating. We learnt about how calligraphy was very ancient and how it had also evolved slightly over time, everything from holding the pen and the construction of the different symbols was discussed. We then had the chance to have a go, this was really relaxing and the students loved it! Some were absolutely brilliant and we were all able to take away what we had produced so you will be able to have a look when we return.

After a quick change into sports clothes we headed over to lunch which was a variety of chicken dishes, sticky rice, and mushroom and tofu soup along with the Chinese staple of…… French fries. Again the food seemed to go down well with most if not all students and they are giving it a real good go which is great.

We then headed over to the huge sports hall to prepare for the sports festival that was going to be attended by some of the primary school aged students here at Gold Apple. Students were joined by their Chinese counterparts and quickly set about moving equipment and getting everything ready. As the nervous young festival participants arrived they were greeted by cheers and high fives from the sports leaders. We quickly got them into groups and sent them to stations where a JH and GA student would be working together to deliver a sporting activity independently for around 5 minutes before the group moved on to the next station. We had everything from bowling, basketball, football, hockey, obstacle courses, hula hooping and much more. Very quickly the nervous primary students became noisy, enthusiastic learners loving every minute of what was being delivered to them. Our students were incredible and worked tirelessly for the whole festival motivating, encouraging and leading throughout and most importantly they were putting smiles on all of the primary student’s faces. At the end we gathered all 120 students along with the sports leaders for the closing ceremony. I gave a speech thanking the school for allowing us to be here delivering these activities and Simran, Grace K and Emma also gave short speeches very confidently as well I must say. What was probably most surprising and I would say the best bit of the whole festival was when some of the young Chinese students were then invited up to come and speak in English thanking us and saying how much fun it was and what an experience it was for them to be able to practice their English. 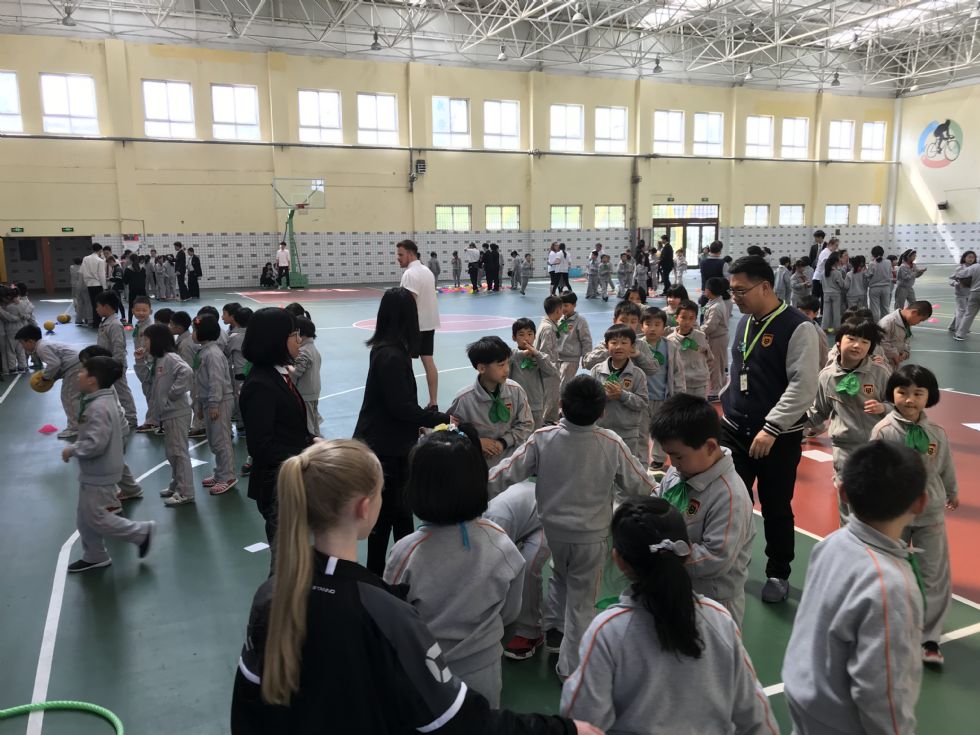 As if we hadn’t done enough it was then time to go and make our own dinner! We had a lesson in dumpling making from one of the chefs here at the school and all of us were given the opportunity to make some traditional Chinese steamed dumplings. The chef was brilliant going round all the tables showing the students how to make them and it was explained that this is a very traditional things that lots of Chinese families will do leading up to holidays and family celebrations etc. They came in all shapes and sizes but again it was very relaxing, students seemed to be enjoying it and most importantly they were joined by some of their Chinese counterparts and had the opportunity to bond and make friendships again before the upcoming homestay this weekend. The dumplings were then whisked off to be cooked, when they returned they looked and smelt incredible and the students all tucked in to a meal they had made themselves!

After a nice big meal we thought it would be nice to have a walk so we headed over to the supermarket again to allow students to grab some items they had been missing surprisingly a few went for fruit and we also bought a load of apples and bananas for students to tuck into when we got back to school. We encouraged the students to have a very good look around in the supermarket as it’s an experience in itself in particular the fish and meat counters. Students came back with an array of stories and sightings from live water snakes and toads, black chickens and an array of edible chicken feet.

Another very long and tiring day however the students are in great spirits. Since getting back tonight they have had the chance to chill out a bit lots of them taking the opportunity to have a shower and get into their pj’s. I must admit the students have been hugely impressive so far and a massive credit to you all and the school as well!

It’s now 9.15pm over here and I think there will be another early night for most ahead of a really exciting day of sightseeing tomorrow. We are heading to the science museum, markets, going up the pearl tower all followed by an evening at the circus.

We will try our absolute best to send over some photos from the past few days, hopefully all students have been in contact individually however if they haven’t please let us know and we will chase them along. Similarly if there are any issues that come up and students are worried to mention them to us teachers then please feel free to email us anytime. 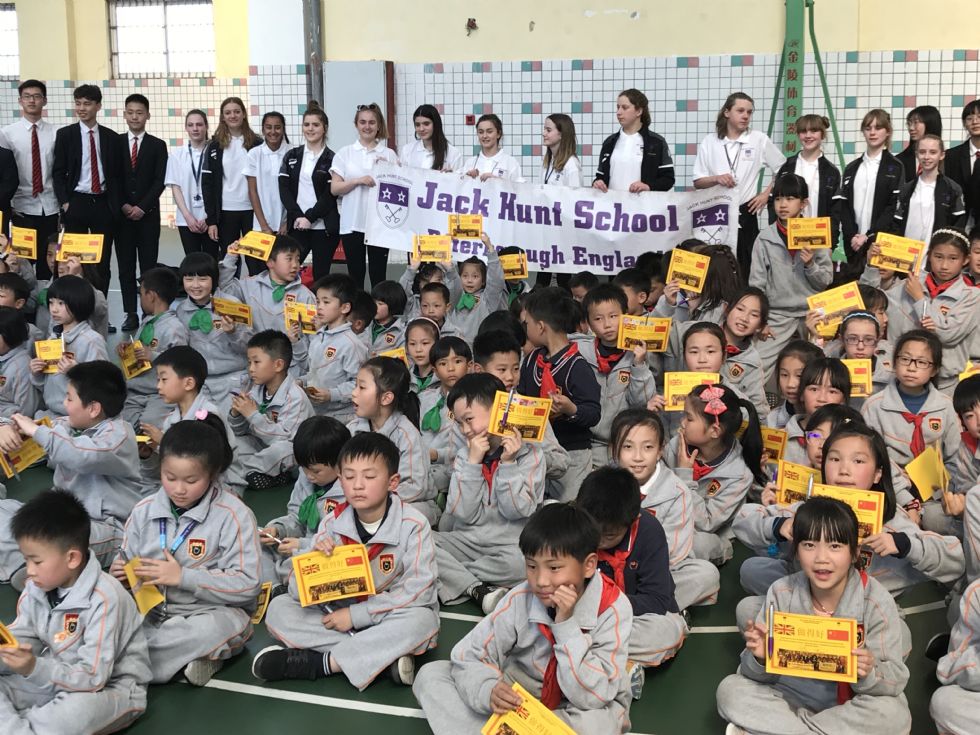