Students took to the stage in Shakespeare's Hamlet

The Shakespeare In schools cast were assembling in the Block 4 atrium getting ready for the final rehearsal of our performance of Hamlet, this also happened to be the dress and technical rehearsal for us. We got on the bus and headed off on our journey to the Key Theatre, where we were met by some of the Shakespeare In School staff, who led us to the stage.

We then proceeded to have the dress and technical rehearsal, which consisted of a stopping and starting for the lighting cues. We then had our first full run through on a professional stage which went as well as it could have possibly gone, there were a few hic-cups along the way but we could easily iron them out for our final performance.

Pre-stage jitters surged through the cast as the final performance drew closer, with the last few speeches of wisdom form Miss Plane and Miss Mills, Drama Teachers, we were ready. The stage was set, the lights dimmed, we entered. Giggles, nerves and missed lines were forgotten as the introduction came to a close and the first scene began. Throughout the performance we performed expertly, showcasing our skills in drama and our understanding of Shakespeare and more specifically our understanding of Hamlet. As each character died off, the performance slowly drew to a close as Hamlet spoke his last few lines, the audience was stunned. As we bowed the audience stood and applauded our fabulous performance. We are all very proud of what we have achieved. 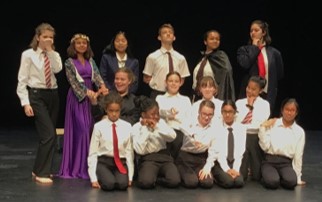 “Shakespeare In Schools was a great chance to improve my confidence and I am forever grateful for it” – Alarna Cranston, Year 10

“Getting the opportunity to perform as Hamlet was a honour, I loved every part of it” – Annie Whyman, Year 10

“I really feel as if I have made a connection with the cast and I will miss them so much” - Gemma Fisher, Year 10

I would like to extend my most sincere congratulations to the Jack Hunt School for your tremendous production of Hamlet as part of the 2019 Shakespeare Schools Festival. It was an excellent night of theatre, and I’d like to highlight a few aspects that really stood out.

A slick, stylish and hauntingly evocative opening, we were instantly engulfed in the world of your play. The beautifully held and seamlessly flowing stage pictures were delivered with commitment, focus and intensity. The continual presence of actors' bodies onstage to frame the world was a glorious theatrical device and particularly chilling with the breathing sounds during the entrance of the ghost of Hamlet's father.

Your characters were well created, emotionally full and the complexity of their troubled minds was brought beautifully to the fore and charged with intensity and intelligent thought.

There were so any moments to relish in, particularly entrancing was the wonderfully executed drowning of Ophelia, really celebrating the dexterity of the actor's body in space and so sympathetically delivered.

You tracked the ark of this ominous world to its intensely charged climatic moments marvellously. A powerful, professional, committed ensemble.

Huge congratulations for performing a totally terrific and tragic Hamlet!

Performing Shakespeare’s words on a professional stage takes bravery, resilience, and creativity. You should be immensely proud of what you and your teachers have achieved in this Season of Infinite Variety.

I hope to see the Jack Hunt School in the 2020 Festival! 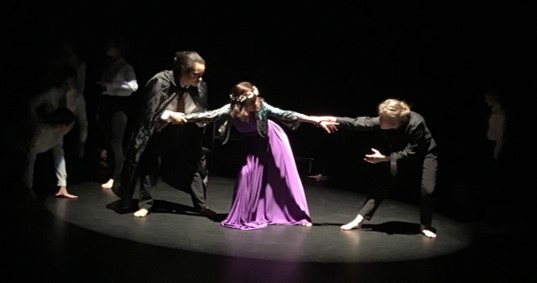