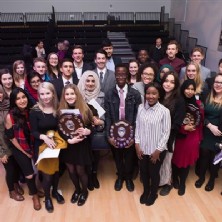 Our annual Presentation Evening on 21 December was another wonderful evening.

Our annual Presentation Evening on 21 December was another wonderful evening.  A packed hall of VIPs including the Mayor of Peterborough, Councillor David Sanders and Cabinet Member for Education John Holdich, special guests, past and present staff and governors, plus parents shared in celebration as past and present students were presented with GCSE and A Level certificates and other special awards and prizes by Lance Corporal Cassidy Little.  Cassidy lost his right leg when an improvised explosive device was triggered, resulting in three fatalities. However, despite his own horrific injuries and the resultant intensive and lengthy rehabilitation, which included a week in an induced coma and two months in hospital, he went on to star in a West End show and then, in 2015 compete in, and win, The People’s Strictly Come Dancing on BBC TV.

The major winners of the evening were Elizabeth Bowes who won 3 awards on the evening; The Governors’ Commendation Award for excellent A level results, The Michael Taylor Award for producing the Best English Essay and The Sue Titman award for Dedication and Leadership as part of the Head Prefect Team. Wilson Wang received two awards, the Richard Marks Mathematics Award  and the Galileo Trophy for Research in Physics.  Alice Taylor received the Sarah-Jane Woolley Shield, for demonstrating outstanding contribution to the Duke of Edinburgh Award and the Chris Hilliard Student Leadership Shield.

This year we were also pleased to present a new award to honour Mrs Maria Pidoux a former member of staff who retired earlier this year after 22 years’ service at Jack Hunt School.  Maria always expected students to do their best regardless of their level of attainment and wanted to acknowledge this in future years by sponsoring an award for all round excellent effort and dedication. The inaugural winner was Harvin Jassar who attended every after school and Saturday revision session he possibly could.  Mrs Pidoux attended the event and said Harvin “definitely deserved the award”.

Other significant achievements included Jamie Scholes who was awarded the Richard McPartlin Award for the student who has reached the highest level in competitive sport.  His dedication and training, whilst studying for his GCSEs resulted in him competing in the British Swimming Championships where he qualified for the final of the 200m backstroke and broke his Personal Best by 1.5 seconds to finish fifth. 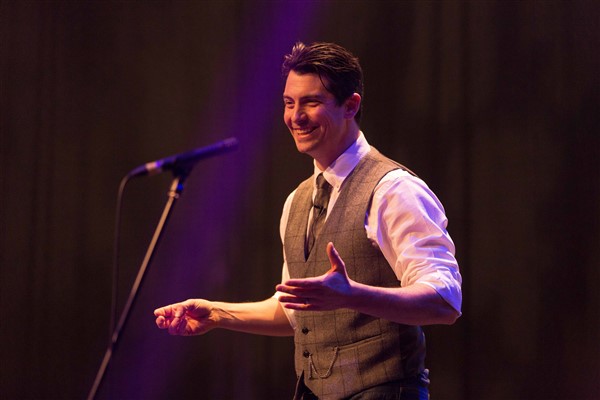 After the presentations, Cassidy Little inspired and motivated the audience by recounting his experiences and what they taught him. Many guests spoke of his bravery and determination and how entertaining he was to listen to. Head Girl, Nicolle Moyo, said “his persona is admirable”. One moment which stood out among the rest was when Cassidy spoke about his ‘Five Fundamentals’ which were; pride, Determination, Aggression, Resilience and finally and most importantly Cheerfulness in the face of adversity.

Chair of Governors, Alan Sadler, said about the evening “Sometimes being a Chair of Governors is a really good gig and tonight is one of them.”  Lawrence Acosta Paxton, now studying in year 12, said the event was a “really good night to be part of; Cassidy’s performance was good and it was great to see all the students' performances”.  Ex-prefect, Dan Brown, who came to collect his Prefect Award thought the event was “a fantastic way to record achievements of students”.

Headteacher, Pamela Kilbey, gave a special award to John Gilligan who is leaving to be Head of Hampton for the fabulous way he has organised Presentation Evening for the last 5 years.